Olive Garden Restaurant is an American casual dining restaurant chain specializing in Italian-American cuisine. It is a subsidiary of Darden Restaurants, Inc., which is headquartered in Orange County, Florida.

What is Hibachi? Japanese Hibachi VS a Teppanyaki grill

The Italian-American chain restaurant has been open since the 1980’s. The very first Olive Garden was opened in 1982 on Orlando’s busy International Drive. It’s still open today, although if you visit, be aware that extensive remodeling has left it pretty unrecognizable from the original restaurant.

In an effort to immerse you in the look, feel, and taste of Italy, the restaurants were once modeled after a farmhouse in Chianti, Italy. The Olive Garden restaurant chain even offered a regional Tuscan menu in honor of the area that inspired their restaurant.

Although Olive Garden has changed over the years and may not be as authentic as eating in Italy, it may be the closest thing to an Italian restaurant that you can find in the community in which you live.

Some people prefer soup instead so you can choose from one of their four soups (that they currently offer) instead of salad.

The breadsticks will usually be refilled several times by your server if you have ordered a meal from the menu.

For a while, Olive Garden’s investors thought too many breadsticks were being served (per the Washington Post) and ordered that they would be limited to one per guest. That policy bombed though, and although thousands of breadsticks go to waste each night (according to Food and Wine), the baskets are still loaded up at every table.

Since people love the unlimited soup, salad, and breadsticks despite all of the waste it is worth it for Olive Garden to continue to offer this as it keeps people coming back.

To see the most popular Olive Garden dressings and flavors just click here. 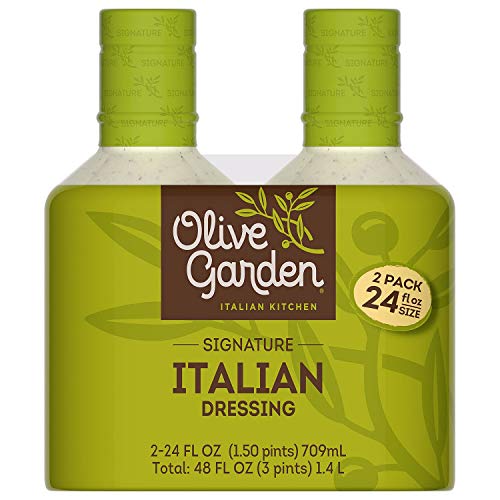 Do You love Olive Garden’s Dressing but don’t live quite close enough to one to get there regularly?

Well now you don’t have to!

You can order a two pack of this delicious dressing and have it anytime!

The Pasta Pass from Olive Garden has been a promotion for Olive Garden in the past. This promotion started in 1995 and this pass would entitle any customer holding a Pasta Pass to enjoy unlimited pasta and sauce when they would eat at the Olive Garden for a period of time.

In August 2019, Olive Garden increased the number of passes to the Never Ending Pasta Bowl to 24,000, and thanks to a savvy social media campaign, introduced the Lifetime pass for $400, which sold out instantly.

The Never Ending Pasta Bowl Pass sold for $100 and was only good for the nine-week period that the Olive Garden schedules, usually August through November, but you could go as often as you like during those nine weeks. At first, it seemed like a good deal. But let’s add up all the costs. The Never Ending Pasta Bowl goes for $10.99, and it includes unlimited soup or salad and breadsticks.

You can order as many dishes as you like, but anything else — including drinks — is extra. A “bottomless” soft drink is $2.99, and juice, coffee, and tea range between $2 and $5, as listed on Olive Garden’s menu. When you throw in tax and tip, that’s an extra $6 or $7 added to your bill.

So for the Never Ending Pasta Bowl to be worth it, you would have had to go to Olive Garden 18 times in nine weeks just to break even.

You could start by choosing one of the eight kinds of pasta (gluten-free rotini was a recent addition), one of the five sauces, and finish it off with one of six toppings, all of which could be a hearty meal by itself. So if you do the math, theoretically, you could eat 391 bowls of pasta and each one would be different.

The Never Ending Pasta Bowl Pass wasn’t just about bowl after bowl of unlimited pasta. The deal also included your choice of unlimited soup or salad, and it wouldn’t have been a complete meal at Olive Garden without the famous unlimited breadsticks.

Olive Garden discontinued the Never Ending Pasta Bowl in 2020 during the shutdown, but since it has saved the restaurant in the past, it’s likely it will come to the rescue again.

Olive Garden does offer on it’s menu unlimited soup, salad and breadsticks as a separate menu item. The lunch menu currently offers this item for around $7.99, and the dinner menu offers this for around $9.99, but this pricing depends on the location.

Keep in mind that Olive Garden is famous for its entree sizes. If you plan to fill up on the salad and breadsticks you may want to order an entree to split between 2 people, or just an appetizer to go with your bread and salad.

You can also download the Olive Garden app for various promotions and sales they offer. Some of the promotions are only good for a few hours so you would have to act fast to take advantage of the offer. Some promotions may only be between certain hours of the day, so always pay attention to the details they are sending you.