Both chicken and shrimp are high in protein and can be delicious to eat. Maybe you are craving a meal of both of these paired with some rice or noodles and veggies.

To save on time and so you only have to use one pan, can you cook chicken and shrimp together?

Now, the first question that may come to your mind is, is it safe to cook chicken and shrimp together. The answer is yes, it is. Just follow basic rules of hygiene and make sure they are both cooked thoroughly before you serve them.

Chicken and shrimp can be cooked together in one pan or skillet. This can help out with less dishes you have to clean up after you are finished cooking while also adding flavor. Just combine the meats with some fresh veggies and you will have a yummy meal.

So, you could end up with overcooked shrimp that just doesn’t taste as good as it should. You should let the chicken finish cooking or almost finish cooking before adding in the shrimp to the pan. The shrimp can cook in the time it will take the chicken to brown.

Then, they will both be done at the same time for a perfectly cooked meal of chicken and shrimp.

So, chicken and shrimp can be cooked together in one pan for a delectable meal.

But can you marinate them together? Yes, you can marinate chicken shrimp together as well. They will be cooked anyways so it’s okay to place them in the same container or bag to marinate before you cook them. But, do not reuse the marinade or save it after it has been used for raw chicken or shrimp.

Since chicken and shrimp are similar in taste and structure (and if you are wanting to eat them together anyway) they can be marinated and cooked together. To see some of the most popular meat marinades just click here.

How Long Should Shrimp Cook For?

Now, most people know how to cook chicken, so I will skip explaining this process. Basically, you let one side cook and flip it over to the other and once the inside is white and has a temperature of 165F, then it is done.

Shrimp on the other hand can be a little more tricky to get perfectly cooked. Cooking shrimp can be a bit of a pain. You don’t want to overcook or undercook them.

So, how long do you cook shrimp for?

Shrimp could be cooked for about 1 to 2 minutes on each side. They cook really fast and should be watched carefully. Once their thickest part opposite the tail turns from transparent to opaque, the shrimp are finished cooking.

It’s very important that everything is cooked thoroughly. Chicken should be cooked to an internal temperature of 165F with no pink on the inside. Shrimp don’t need as long to cook a chicken but still need to be thoroughly cooked.

Shrimp needs to be thoroughly white before it is served. The temperature of shrimp doesn’t really matter as long as it’s pink all over, then it is safe to eat. If you aren’t sure, just break open one and check and see if it is opaque all throughout it.

Being able to tell when shrimp are finished cooking and ready for you to eat is easy. Shrimp cook really quickly making it also easy to undercook or overcook them. Searing or grilling shrimp on high heat will give you the best results. It will give them plenty of flavor making the shrimp juicy and tender without being stringy and chewy.

Before you begin cooking the shrimp make sure it is well deveined. Heat up some butter or olive oil in a pan on high heat. Spread out the shrimp in an even layer in the pan or skillet and let them sear for about 1 to 2 minutes. At first,the shrimp will stick to the pan but after its exterior has seared, they will release naturally from the pan and can be moved around easily.

Once they can be moved, flip them over to the opposite side and let them cook for 1 to 2 minutes.

Now, you can’t see on the inside of the shrimp to see if it is white, so it may be hard to tell how long until it is finished cooking. So, watch the crevice in the back of the shrimp where the vein was removed. This is the thickest part of the shrimp and is opposite the tail.

When the flesh of this part changes from transparent to opaque, then it is done cooking. Remove immediately from the heat so you don’t overcook them. Remove the shrimp from the pan (which is still hot and will still cook the shrimp) and transfer to a plate.

So, in order to properly cook shrimp to perfection, you should watch it carefully. Shrimp only needs a few minutes to cook before it is ready to eat. 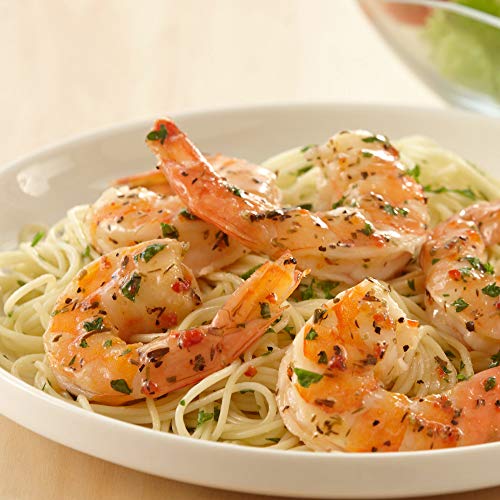 Make sure that the chicken and shrimp are both cooked thoroughly before serving and you have yourself a delicious dinner that can be paired with a variety of sides.