Table Of Content show
1 Why Did Taco Bell Stop Selling Mexican Pizza?
2 What Is On A Taco Pizza From Pizza Hut?
3 Does Dominos Make A Taco Pizza?
4 Who Created The Taco Pizza?
5 Is Taco Pizza A Regional Thing?
5.1 Related Posts:

Taco Bell’s Mexican pizza should not be confused with taco pizza that you can pick up at different pizza places. Taco pizza is made on pizza crust with refried beans in place of the sauce then topped with cheese and hamburger before being cooked in the oven.

Once the pizza has been removed from the oven it is then topped with lettuce, tomatoes, and crunchy corn chips such as Fritos.

The Mexican pizza from Taco Bell was a huge favorite but it was time consuming to make and some of the ingredients were difficult to find at a decent price.

The Mexican pizza at Taco Bell was a combination of Mexican food and Italian food. It started out with a nice crisp tostada shell which has a layer of refried beans and seasoned taco meat.

Another crisp shell tops this, sandwiching the meat into it. Then a layer of pizza sauce is spread across this top crispy shell. That is then topped with tomatoes and a three-cheese blend.

You were able to customize your Mexican pizza when you ordered it. For an additional charge you were able to add a variety of toppings such as chicken, steak, seasoned rice, lettuce, black beans, onions, and more. 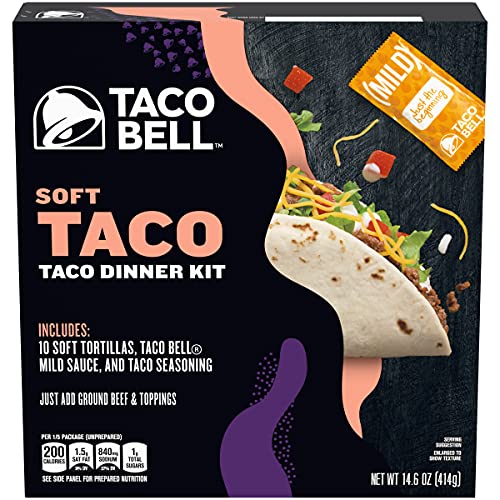 In November of 2020 Taco Bell removed the popular Mexican pizza permanently off of their menu. With it being such a popular item, you might be wondering why they removed it from their menus?

Taco Bell said that they removed the Mexican pizza from their menus due to environmental reasons. However most people believe it was because of the difficulty in making the item and how the different parts of the Mexican pizza weren’t interchangeable with other menu items.

In January of 2020 Taco Bell updated their mission statement. Their goal is to be an eco-friendly restaurant. In their updated mission statement Taco Bell says it wants to concentrate on “making all consumer-facing packaging recyclable, compostable, or reusable by 2025.”

Instead of looking into new packaging ideas for their Mexican pizza the company decided to eliminate it from their menu.

What Is On A Taco Pizza From Pizza Hut?

So now that Mexican pizza is no longer available at Taco Bell many people have turned to pizza stores to get some taco pizza.

Pizza Hut first introduced their taco pizza in the late 1970s. It was a popular and delicious pizza.

Pizza Hut’s taco pizza was made with seasoned ground beef, refried beans, taco sauce, and cheese. After it came out of the oven it was topped with tomatoes, lettuce, and chips.

This pizza also has onions, tomatoes, and lettuce.

Does Dominos Make A Taco Pizza?

You can customize your chicken taco pizza when you order it which means that you can add beef to your pizza and remove the chicken if you want to. This way you can get a beef taco pizza even though they do not have one on their menu.

Who Created The Taco Pizza?

In 1972 Happy Joe’s Pizza was opened by Lawrence Joseph “Happy Joe” Whitty. There are now over 61 restaurants throughout Iowa, Illinois, Minnesota, North Dakota, Missouri, and Wisconsin.

Happy Joe Whitty said he came up with the idea for a taco pizza after a customer had suggested that he add tacos to the menu. That is when Happy Joe invented his restaurant’s best selling pizza, the taco pizza.

This pizza was made with refried beans, sausage, tomato sauce, cheese, lettuce, and taco chips. Happy Joe’s Pizza and Ice Cream does not just have one taco pizza but they offer three different kinds.

The Taco Joe is refried beans, sausage, and taco seasoned beef. It is then topped with lettuce, tomatoes, and taco chips and served with Spicy Joe’s taco sauce.

The Taco Supreme starts out as a Taco Joe but then it also has sour cream, black olives, and onions. Then they offer the Nacho Joe pizza.

This pizza has a spicy nacho cheese sauce, taco seasoned beef and sausage. The Nacho Joe is topped with lettuce, tomatoes, and taco chips.

Is Taco Pizza A Regional Thing?

Taco pizza is an incredible invention. The combination of pizza and tacos, it is a perfect comfort food.

Taco pizza was invented by Happy Joe Whitty in Iowa in the Quad Cities in the early 1970s. Taco pizza has been a staple in the region ever since.

Not only does Happy Joe’s offer a taco pizza now but so do several other places, in many other states. You can find taco pizza at Casey’s, Dominos, and many other restaurants.

This pizza will normally have refried beans instead of sauce, seasoned beef, and cheese then topped with tomatoes, lettuce, and taco chips and is a favorite in the Midwest. If you are trying taco pizza for the first time then I hope you get a good one.

There are some places who put the tomatoes on before the pizza is cooked which alters the flavor and texture of the taco pizza. Diced tomatoes are supposed to be put on the taco pizza after it comes out of the oven.

Once the taco pizza comes out of the oven that is when the diced tomatoes, lettuce, and taco chips get loaded on. If you are getting a taco pizza that was made properly then you will have a generous topping of taco chips covering the top of your pizza.

I have seen taco pizzas arrive at our door that barely had any lettuce, chips, or tomatoes on it. Those taco pizzas are disappointing to say the least.