Table Of Content show
1 Can You Fry Chicken On A Griddle?
2 How Do You Deep Fry On A Flat Top Griddle?
3 Final Thoughts
3.1 Related Posts:

If you are looking for a flat cooking surface that you don’t have to grease and can be conveniently put away when it’s not in use, a griddle is the right thing for you. Most commonly used to cook breakfast foods such as pancakes, bacon, eggs, etc. a griddle makes it easy to flip the food over because of its flat shape.

And you read that right earlier, you don’t even have to grease it! Unless you want to of course. Since you can cook all sorts of foods on one of these useful kitchen items, you may be wondering, can you fry on a griddle?

Unfortunately you cannot fry on a griddle. The reason why is because a griddle is a flat cooking surface and to fry something you will need a deeper pan. This way whatever food you are frying can cook in a lot of oil.

The definition of frying is cooking food in oil or another fat. You generally use more oil to fry foods than you would to saute or cook regularly. Fried foods are normally breaded and when cooked in the oil it becomes crispy. So, you can see why you couldn’t fry on a griddle.

A griddle is a flat surface so it wouldn’t be enough oil for the breaded food to cook in. If you were to cook chicken on a griddle, you wouldn’t be able to fry it, but you could cook it normally.

Griddles are great for cooking all sorts of foods, especially foods that are supposed to be flipped. Burgers, pancakes, quesadillas, etc. are all able to be cooked on a griddle. But fried foods need to be cooked in a deeper pan with more oil. That’s why you use a frying pan for frying. It has higher walls whereas a griddle has very low walls and ridges.

Is A Frying Pan A Skillet, Superb 4 Facts About This Tool!

A griddle is flat and the oil will pour off the side if you try to fry on it. So, unfortunately you cannot fry on a griddle.

To get a deep fryer appliance that will fit right on your counter and can be used to fry anything and everything just click here. 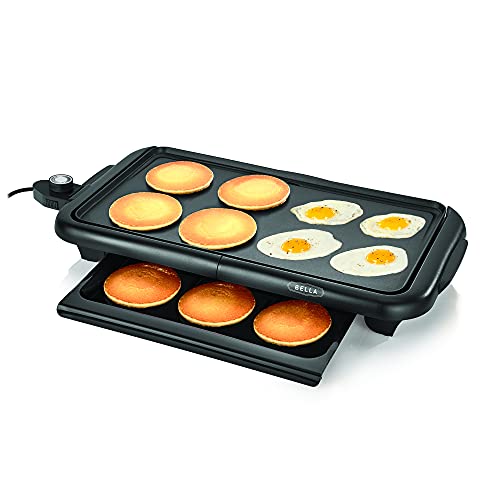 Can You Fry Chicken On A Griddle?

Fried chicken makes a wonderful dinner. Its crispy breading works perfectly with the juicy and tender meat inside. If you want to fry chicken on a griddle, can you?

Usually, chicken is fried in a lot of oil, and on a griddle, you just can’t do this. Its sides are too low and the oil will pour over the edge. But, if you grease the pan in a generous amount of oil and place the breaded and thinly sliced chicken on the griddle, this can give you an alternative to traditional fried chicken.

It is even healthier since the food isn’t breaded as much or cooked in as much oil.

Now, if you are wanting to fry like you would in a frying pan, just use a frying pan on a stove burner. A griddle won’t work since it isn’t deep enough. Griddles are for cooking things that tend to be easily flipped.

According to The Spruce Eats, a griddle “…works well for not only pancakes and eggs but also bacon, French toast, hash browns, and other breakfast items. Griddles are also often used for cooking burgers and other hot sandwiches such as grilled cheese…A commercial griddle (i.e. a griddle that is built into a range top) may look similar to a flat top but they are different in certain respects. For one thing, flat tops tend to be made of lighter steel, and the heat source underneath is made up of multiple round burners, not one that is rectangular and runs across the entire top, as is with a griddle. Also, only food is placed directly on the griddle, whereas a flat top can accommodate both food and cookware (such as pots and pans) on its surface.” 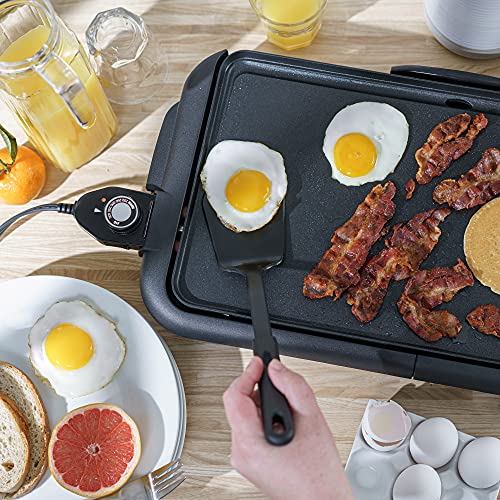 How Do You Deep Fry On A Flat Top Griddle?

Fried foods are crispy and delicious. Chicken, potatoes, fish, etc. the list goes on and on of food you can fry. So, you want to try to deep fry on a flat top griddle. How do you do this?

A regulator portable griddle won’t be able to fry chicken but an outdoor Blackstone griddle can. All you have to do is place the frying pan on the griddle and cook like you would on a stovetop.

So, in order to fry on a Blackstone griddle, you can use a cast iron skillet on top of the cooking surface and fry away. This outdoor griddle can get really really hot so using a regular skillet wouldn’t be the best idea. You don’t want parts of it to end up melting.

So, cast iron is the way to go if you are wanting to fry on top of the griddle.

Griddle pans are available in a variety of shapes and sizes and can get you nicely fried foods and by using these you can deep fry on one of the outdoor Blackstone griddles.

On the other hand, a regular portable griddle cannot fry chicken. That is, traditional fried chicken that features a lot of breading that needs to be submerged in oil. If however, you want to bread the chicken, be sure to cut it thinly and pour a generous amount of oil on the griddle but not so much to where it will drip over the sides.

This can give you a healthier alternative to traditional fried chicken.

According to Griddle King, “The heat that comes off a Blackstone griddle can be in excess of 500 degrees Fahrenheit, so seriously hot…Cast iron can withstand an enormous amount of heat because it is such an excellent heat conductor. You won’t regularly be trying to get your Blackstone griddle to the top end of its heating capability because most food won’t require it, but even if you did, your cast iron skillet could handle it…

Because all of it is made of the same cast iron material, all of it is able to withstand serious heat.So don’t worry, you absolutely can use your cast iron skillet on a Blackstone griddle, and you can do so completely safe…even the folks at Blackstone’s support say its OK to use cast iron on your griddle.”

You cannot fry on a griddle. Frying uses a lot of oil for the food to cook in and a griddle is a flat cooking surface with very low slides. Now, if you want to fry in a healthier way with less oil, you can do this in a griddle.

An outdoor griddle like a Blackstone griddle, allows for the use of griddle pans or cast iron skillets. So, you can fry and deep fry in one of these on top of the griddle.

As far as traditional frying, leave that for the frying pans since a griddle is used more for cooking things like burgers, pancakes, etc.