Fried foods are just so good. Served as a side to many foods, they are comforting and tasty. With that layer of crispiness on the outside it’s no wonder they are a popular food. Many restaurants provide their customers with fried foods and you can also cook them yourself at home.

Now, there are several ways to fry food but what if you want to use something special. If you own a Blackstone grill (actually called a griddle) you may be wondering if you can fry food on it.

Taco Oven Baked Round Fries || Dining In With Danielle

Alright, so the thing you are calling a Blackstone grill is actually a griddle. A griddle has a flat cooking surface that can be used to cook all sorts of food, also making it easier to flip them over. A Blackstone griddle is an outdoor appliance and you can cook all kinds of food on it.

You can even fry on a Blackstone griddle.

The griddle gets really really hot so cast iron is the best utensil to use for frying on one of these outdoor grills. All that to say, if you want to fry on a Blackstone griddle, you can!

To see some of the most popular Blackstone grill accessories just click here. 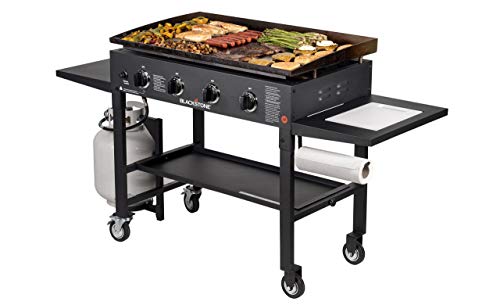 Can You Fry Chicken On A Blackstone Grill?

Fried chicken is a wonderful comfort food. Its crunchy breading coats the juicy and tender meat inside for a delicious meal. If you have a Blackstone grill (aka. griddle) and want to fry some chicken on it, can you?

You can fry chicken and other foods on a Blackstone griddle. Although you can fry the chicken directly on the flat surface of the grill, you can also fry it in a skillet or pan on top of the appliance.

To fry on a Blackstone griddle, you can use a cast iron skillet on top of the cooking surface and fry away. It is important to note that this outdoor griddle can get very hot so using a regular skillet just isn’t the best idea. If you use a regular skillet, some parts of it could end up melting and you don’t want this to happen.

Saying this, cast iron is the way to go if you are wanting to fry on top of the Blackstone griddle. Griddle pans are available in a variety of shapes and sizes and can get you nicely fried foods. By using these you can deep fry on one of the outdoor Blackstone griddles.

On the other hand, a regular portable griddle cannot fry chicken. That is, traditional fried chicken that features a lot of breading that needs to be submerged in oil. If however, you want to bread the chicken, be sure to cut it thinly and pour a generous amount of oil on the griddle but not so much to where it will drip over the sides.

This can give you a healthier alternative to traditional fried chicken. So, yes, using the right skillet, you can fry on a Blackstone griddle! 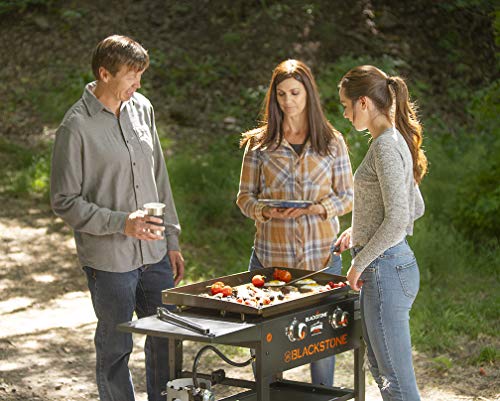 Can You Put A Cast Iron Skillet On A Blackstone Grill?

We mentioned using a cast iron skillet but can you use one of these on a Blackstone griddle?

According to Griddle King, “The heat that comes off a Blackstone griddle can be in excess of 500 degrees Fahrenheit, so seriously hot…Cast iron can withstand an enormous amount of heat because it is such an excellent heat conductor. You won’t regularly be trying to get your Blackstone griddle to the top end of its heating capability because most food won’t require it, but even if you did, your cast iron skillet could handle it…Because all of it is made of the same cast iron material, all of it is able to withstand serious heat.So don’t worry, you absolutely can use your cast iron skillet on a Blackstone griddle, and you can do so completely safe…even the folks at Blackstone’s support say its OK to use cast iron on your griddle.”

So, yes, you can use a cast iron skillet when frying on a Blackstone griddle. This is the best way to cook the chicken on your grill. It will cook your food well and also be able to handle the heat.

Choose a cast iron skillet that is deep enough for you to use a lot of oil and fry away!

You can fry on a Blackstone grill. Using the right pan, of course, You can cook all sorts of foods on this griddle, even chicken. Just be sure to use the right kind of skillet for frying on this outdoor grill.

A cast iron skillet is the best choice for frying on a Blackstone. Choose one that is deep enough to submerge the food in oil so you get perfectly crisp and golden foods.

So, if you want to fry on a Blackstone grill/griddle for a comforting and delicious dinner, you can!