A café latte, which is often just called a latte in the United States in an Italian drink made with espresso and steamed milk. Regular coffee is slow brewed coffee beans.

Espresso is coffee, it is simply brewed differently than regular coffee.

When comparing different coffee drinks you might want to know which one is stronger, normal coffee or lattes?

The milk that is added to a latte cuts down the strength of the espresso that is in the drink. If you want a stronger latte, you can ask for a double shot of espresso. The extra shot of espresso will add 75 milligrams of caffeine to your latte and a bolder flavor.

A cup of black coffee typically has 95 milligrams of caffeine so a double espresso in a latte will give it more caffeine however it likely still won’t taste as strong as black coffee since it has all the extra milk and sugar in it.

To see the most popular coffee gadgets just click here. 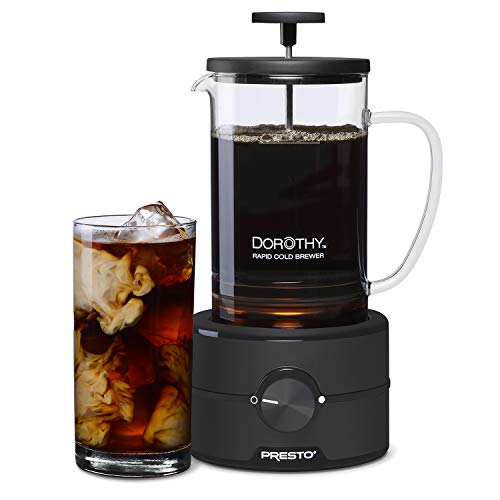 Tired of spending a small fortune on coffee? Then you have to check out this amazing electric cold brew coffee maker.

It works amazing and won’t break the bank.

How Strong Is A Latte?

Lattes contain a lot of milk. Usually, a latte contains a cup or more of milk and one or two shots of espresso. Each shot of espresso contains about 75 milligrams of caffeine.

A regular latte will usually contain less caffeine than a regular cup of coffee would contain. If you want a stronger latte, you could ask for an extra shot of espresso.

The more shots of espresso that your latte contains the stronger the drink will be. It will not only give you more caffeine but it will also give you more of a coffee flavor.

The large amount of milk that is in a latte covers up most of the flavor of the espresso so when compared to other coffee drinks it isn’t very strong in regards to flavor.

Is Espresso Stronger Than A Latte?

An espresso is a highly concentrated brew of coffee that is served in a shot. Espresso can be made from any coffee bean because espresso is not a specific type of coffee, it is a way of brewing coffee.

You can purchase espresso beans but that just means that the beans were roasted longer and will therefore be darker than other coffee beans with a richer flavor.

An espresso is brewed by sending pressurized, near boiling water through finely ground coffee beans often in a cake form. It takes about 30 seconds for a shot of espresso to be brewed.

A latte is larger than an espresso and while it contains the same amount of caffeine it will not have the same taste as an espresso.

An espresso is stronger than a latte since a latte will have an added cup of milk to it, that will cut the flavor down and make it far less strong.

Are Lattes Made With Espresso Or Coffee?

If you are considering getting a latte for the forst time you might wonder how they are made. Do they use regular coffee or espresso?

Lattes are a hot coffee beverage that is made with a shot of espresso and a cup of milk then topped with a thin layer of foam. If you tried to make a latte with a regular cup of coffee you would not get the same effect.

Espresso is a highly concentrated shot of coffee and brewed in a different way than regular coffee. Regular coffee brews slowly over several minutes while espresso brews in about 30 seconds under highly pressurized hot water.

Espresso has a bolder flavor than a cup of regular coffee. Since you add about a cup or more of milk to a latte, if you use a shot of regular coffee to make your latte you will not have as strong of a coffee flavor as you would if you used espresso.

Lattes made in coffee shops will always use a shot of espresso to make your latte.

What Is The Weakest Coffee?

There are so many different types of coffee drinks out there and you might be confused as to which ones are the best.

Are Lattes More Fattening Than A Cappuccino?

A latte and cappuccino are both made with espresso and milk but they are prepared differently.  A latte has more milk than a cappuccino and less foam since a latte is a shot of espresso and then the rest is milk.

Some people refer to a latte as coffee flavored milk. A cappuccino typically contains 1/3 espresso, 1/3 steamed milk, and 1/3 foamed milk.

What Is Stronger Than A Latte?

If you recently had a latte but want something a little bit stronger then you might be wondering which coffee drink you should choose.

The following coffee drinks would be considered stronger than a latte:

A cappuccino has a much stronger espresso flavor than a latte due to the larger amount of espresso and smaller amount of milk that is in a cappuccino. While a latte and cappuccino contain all of the same ingredients you get a different flavor from each drink because of the way it is prepared and the amount of each ingredient.

A latte contains more milk than a cappuccino which would cut down on the espresso flavor. A cappuccino contains 1/3 espresso, 1/3 steamed milk, and 1/3 foamed milk. While a latte only contains a shot or perhaps two of espresso and then the rest of the drink is milk.

Since a cappuccino contains more espresso, it will have a bolder flavor than a latte.