If you are a chai tea lover or have just heard about the drink you might wonder what exactly is in them. It’s especially important to know what you are putting into your body if you are on a special diet such as being vegan.

Chai tea lattes are a delicious warming drink that blends tea and milk.

Normal Chai tea lattes are not vegan as they contain milk. However, you can make a vegan chai tea latte that uses a plant-based milk or even request one at your local coffee shop. 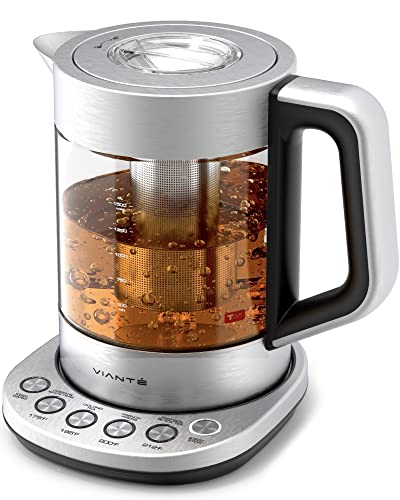 Do you love making tea but hate heating up your house with your stove?

Then you need to check out this electric kettle and tea maker!

It allows you to brew up to 7 cups of tea at once and even has a keep warm function.

Is The Chai Tea Latte At Starbucks Vegan?

If you are ordering your chai tea at Starbucks you might wonder if the drink from there is vegan friendly or not.

The chai tea concentrate at Starbucks contains honey so you will not be able to get a vegan chai tea latte from Starbucks.

There are other drinks that you could get at your local Starbucks that could easily be adjusted so that they are vegan. The easiest Starbucks drink that could be vegan would be Caffe Americano, all you need to do is drink it black or add soy milk.

Why Is A Chai Tea Latte Not Vegan?

A traditional chai tea latte is not vegan because of the milk and honey that are usually in it. If your chai tea latte doesn’t have normal milk or honey they it can be made vegan.

If you are stopping at a different coffee shop and want a chai tea latte then you can simply ask them if there is a way to make their chai tea latte vegan.

What Kind Of Milk Is In A Chai Tea Latte?

With so many different types of milk on the market you might be wondering what kind of milk is used to make a traditional chai tea latte. It really depends on where you are getting your latte from.

Cow milk is what gives the chai tea latte it’s rich and smooth flavor. If you’re wanting to make a chai tea latte at home or ask for substitutes at your local coffee shop then here are a few suggestions.

Soy milk can be substituted in place of regular milk from a cow. Soy milk will give your chai tea latte a similar richness and creaminess to that of cow’s milk because soy milk is versatile and has a more neutral flavor.

It is a great choice for a chai tea latte. Soy milk will blend well with your chai tea latte no matter what flavor you are going for.

Almond milk is not as creamy as cow’s milk and soy milk but it does pair well with chai tea blends that have a little more spice to them.

This will probably be your best substitute if you want a texture similar to normal milk for your chai tea latte.

Can A Chai Tea Latte Be Vegan?

When making a chai tea latte at home there are some pretty simple ways to make it vegan. Chai tea is an Indian black tea that has a blend of spices such as cardamom, cinnamon, ginger root, cloves, and pepper.

Chai tea itself is naturally vegan. A chai tea latte is pretty simple to make at home.

To make a chai tea latte vegan you will want to make sure that the milk and sweetener you use is plant-based. For the sweetener you can use regular granulated sugar, brown sugar, or an artificial sweetener of your choice.

You will want to avoid honey if you are making a vegan chai tea latte.

Plant-based milks that are great options for a chai tea latte are oat milk and soy milk. Oat milk or soy milk will give you a similar creaminess that normal milk would give you.

You could also use almond milk or coconut milk but those will give you a different texture or alter the flavor of your chai tea latte. If you would like a fruitier latte then you should choose to use coconut milk in place of cow milk.

Almond milk pairs well with chai tea blends that have a lot of spice to them but it is not as creamy as oat milk or soy milk.

The first thing that you need to do is make a chai tea concentrate. To do this you will need to bring a quarter cup of water to a boil in a small saucepan. Once your water has been brought to a boil you will then carefully pour it into your cup and drop in the chai tea bag. Allow the tea bag to steep for five minutes.

Once you have removed the tea bag you will stir in two teaspoons of your sweetener. You will need to steam your plant-based milk of choice which can be done while your tea is steeping.

To steam your milk, you will need a small saucepan and a whisk. Over a medium low heat, you will want to continuously whisk your milk while it warms up.

Do not bring the milk to a boil!

Once your milk is warm and steamy you will pour the majority of it into your chai tea concentrate and stir well. Then pour the rest of your steamed milk on top. Now you have a vegan chai tea latte.

You can add a dash of cinnamon to the top of your steamed milk if you would like.